The VIDA Museum & Art-gallery is situated on route 136, nine kilometres south of Borgholm, Öland, with a beautiful hilltop setting, overlooking the waters of Kalmarsund.

The present 2000 m2 building, in glass, concrete, iron and wood, lies on a historic site just north of the Halltorp Inn. At the time of its inaugural opening in June, 2001, the newly-built museum featured an art-gallery and two wings devoted, respectively, to the work of Ulrica Hydman-Vallien and that of Bertil Vallien. Here can be seen the entire range of their artistry, encompassing four decades. The most important starting-points from the early 1960s, to the very latest work in glass, ceramics,
sculpture and painting are shown in the museum.

In 2003, the NORTH GALLERY was added, to house the Rasjo art-collection: an extensive collection of, primarily, contemporary, Swedish art. In 2008 there's a unique show of paintings of Olle Bærtling (1911-1981).

Another new gallery opened in June, 2005, to coincide with artist Ulf Trotzig's 80th birthday. THE TROTZIG GALLERY will display Trotzig´s art, spanning fifty years. Trotzig is one of Sweden's most established artists, and has exhibited his work on numerous occasions, not least at the Royal Academy
of Fine Arts, in Stockholm. He and his wife, authoress Birgitta Trotzig, are part of the Swedish cultural elite. To celebrate the octogenarian, we dedicated an art-gallery to him. 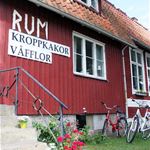 Distance: 3.2 km
Edith & Julia Bed and Breakfast is centrally located in the middle of Oland, 12 km south of Borgholm, in the village Rälla. Edith & Julia is the ideal base for your holiday when it is close to most things. Here are two housing options. You can choose doubleroom with TV inside the main building or 4-bed rooms in an annex the garden. . Breakfast is served in our cozy cafe, and can be enjoyed outside in the garden. Pets are allowed in 7 of the rooms 2 rooms are not allowed for pets.
Book 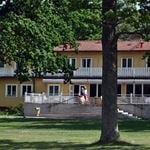 Distance: 6.8 km
Mormors Pensionat Strandhagen, located in Stora Rör on central Öland, opened its doors on 20 July 2014. We offer cosy accommodation with views over the Kalmar Strait. Come and enjoy a peaceful, warm and spiritual environment which will make you feel nostalgic. We have one room where pets are allowed.
Book 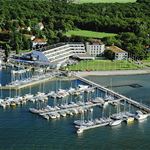